A lot of times men are silent in situations because they don’t have the ability to clearly express their thoughts in a way that women can understand and they always have to worry about a negative reaction possibly happening. Especially if it’s a situation where there is a lot of emotion like an argument or breakup.

Women are extremely sensitive to negative comments from their man. So sometimes it’s better for a man to just shut up in a situation like that. I mean, look how many women argue with me on my page about what men think and go thru. And everything I post is clearly articulated and makes sense. So imagine what men deal with on a daily basis dealing with women. There is also the pride factor. Sometimes the male ego makes it very difficult to admit wrongdoing or take responsibility for something they’ve done. Especially if they feel that whatever they were doing was right or justified. 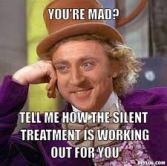 If any adult feels that there is something that needs to be said to their partner they need to bring it up. Discuss it. That’s what adults do. Ending a relationship without knowing what was really going on or if it could have been worked out is always a big mistake. Communication works both ways and requires more than just stating your point. Listening with the purpose of understanding is the most important part of making a relationship last.

It was set to be an objective debate bringing together contestants for the Nairobi Gubernatorial seat, but things could not end up that way. First, most of the contestants kept off the debate with Miguna and Passaris being the only candidates who showed up for the Koinange Live show. Word on the streets is after the previous debate that went up in flames with Miguna tearing into his opponents and Bishop Wanjiru being the most torn causality, most kept off facing him off. But one woman braced the intimidations and showed up, Passaris.

Miguna who has engraved his campaign on dismantling the corruption cartel comes out as one of the candidates with clearest manifestos and a firebrand with a spirited fight to dismantle the wall. Being a braggart by nature with self-praise intellectualism, Miguna who’s now self-baptized himself as Kenya’s Trump version is a man you need iron pants to debate with. Miguna is authoritarian his physical attributes intimidating, he’s disturbingly loud and has one of the fastest mouths in the market. A bully by nature, you have to prepare like it’s a world war before you take on him in a debate or end up being run over.

Passaris on the other hand who is so far the only female candidate in the male-dominated field to make a mileage in pursuing the governor post came collected even though she knew exactly what to expect when debating with Miguna. In a society where male dominance is still in full glare and women squeezing their ways through, it was commendable she braved up to a face off.

The debate was going well until Miguna was served with a defamatory demand letter from Passaris over his persistent attacks on his social media page. He laughed it off before going full army attack on her deviating from the core discussion issues and drowned into personal attacks on the lady.

He went ahead calling her names that shouldn’t have been aired on national t.v. Miguna was consumed in emotional fury hurling unprintable words. This was happening at a prime time when families of both parties were watching you can imagine the pain and disturbances caused on them. Just like his copy Trump made jokes about grabbing women pussy, Miguna made an omelet out of Passaris with insensitive rape jokes. He alluded that Passaris is a good digger and beauty that everyone wanna rape, does this then mean all beautiful women should be raped? He said he’s success is entirely on her beauty and light skin nature does it mean to Miguna that women can’t go up the ladder without sexual prowess? Is that his stamped mindset and tool he uses to uplift those in his scope?